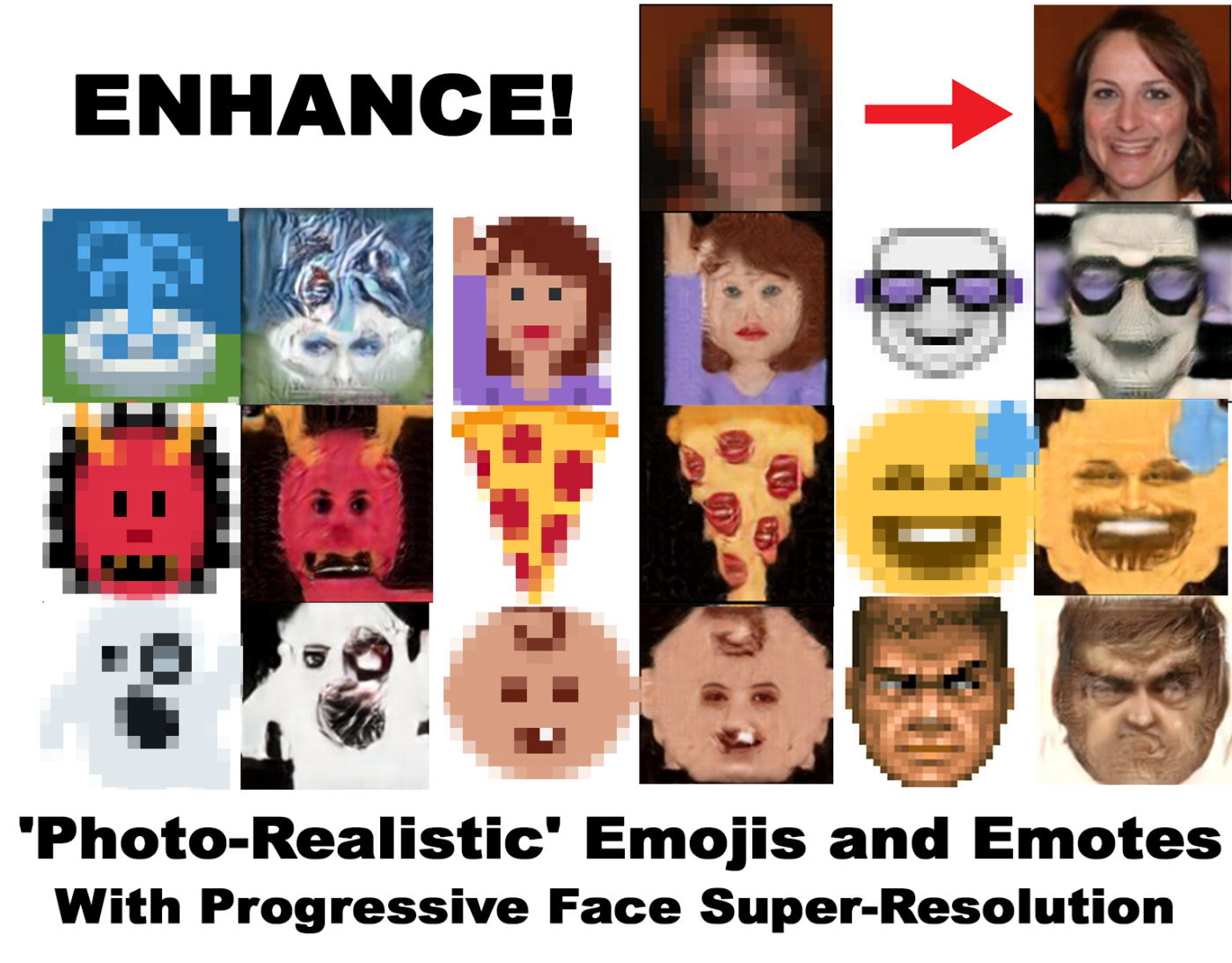 Now we’re getting somewhere! Because this model is trained specifically to look for facial landmarks it will take any excuse to draw eyes and nostrils on a pixel. And I’m pretty sure the pepperoni on that pizza is made out of human lips… 😶

These samples are cherry picked and many outputs were not very interesting. I also went to some lengths to encourage the model to make aggressive guesses about facial features. For example, while the twitter image was already exactly 16×16 pixels, I had better results generally if I first resized it from 16×16 input up to 128×128 via traditional resizing, and then back down to 16×16. This adds a lot of blur which seems to gives the model more room to creatively interpret things. I also iteratively sent the predicted images back into the model as inputs — as many as 10 times — and many of these are from later iterations. It was pretty common to see human eyes in only 3 out of 10 iterations, for example. Here’s some more:

Love this green guy. He never really got human features except for the one eyelid, but the I love the artifact style here.

The distortions reminds me of this Gan Steerability paper, when you zoom in or out of a StyleGAN face model.

What About Twitch Emotes?

Twitch emotes are not available exactly in 16×16, and some of them have high resolution versions while other do not. I tried all sorts so for some of the following the input was already high resolution, but before it goes into the model it was resized down to 16×16. I left these in because there was often an amusing contrast against the real high resolution emote. More:

I think there’s a lot more that could be done to encourage the model to be creative in applying human features — I just tried a few tweaks to the pipeline and iterating, hardly anything. And using other models the possibilities are endless. StyleGAN encoding immediately come to mind:

A quick test of Selfie2Anime.com:

I was asked to try more Minecraft textures, which are 16×16 pixels naturally. The vast majority didn’t really work but a few of them… 😶

The facial features are generally very subtle, which is honestly a lot more creepy than the overt ones. Imagine playing the game and just having a sensation of seeing a face, but you can’t quite place it…

A quick Colab Version of this project I slapped together.

Such an adorable hairy little Goomba!